This leaves his sister Elsie, who was a favourite with me of all the aunts I did have. She was lovely in her ways and I am sure that her regard for me was a genuine recognition that although she had fallen out of favour with my father, her brother, it never lessened my regard for her. 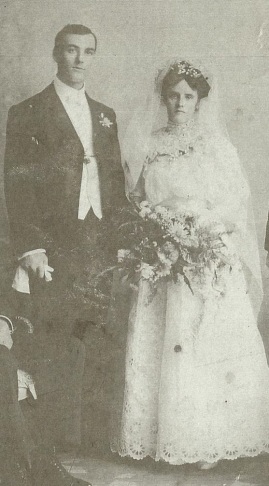 Aunt Elsie had married a man called Gladding who was a fire-fighter. She had one son Desmond, a few months older than me, and a daughter Gwendolyn, who married a boy from schooldays, had a daughter and died sometime in the late 60’s in Wellington. Desmond is still around but like me retired, has not done much with his life other than coast along, has a couple of sons and a daughter, wife a pottery exponent, a “sweetie”.

Elsie Harman Daniel was born on 3 August 1885 in Auckland, New Zealand birth certificate number 1885/9847. The middle name Harman was taken from the surname of a family Thomas and his family travelled with from England.

Elsie’s brother was by then the Rev. Herbert Daniel, he officiated at the wedding and later at Elsie’s daughter (Gwen’s) wedding also.

Frederick was one of six children to Herbert Frederick Gladding and Emma Harper. Both Frederick and his brother Arnold were fire fighters. He was a member of the Albert Street Fire Brigade Station for eight years. His father was also a fire fighter and later the Chief Fire Inspector.

Frederick was, like his father, a boot maker by trade, he was in addition he was a great sportsman: a professional sprinter, competitive cyclist, rowed for the North Shore club, played rugby for the City Rovers and North Shore Albion Rugby Clubs.

He was involved in the setting up of Rugby League in Auckland (Northern Union rules, a break away movement from Rugby Union). He played League for both North Shore and Auckland. (Author’s note – would likely have known Ida Stanaway’s (Capt. Charles Daniel’s wife) brothers).

Frederick was a member of the Auckland Section of the Sixth Contingent – Mounted Rifles – which went to the Boer War in the beginning of 1901 (Service Number 3231).

The Auckland 6th Contingent just before departure – Frederick, second back row 7 in from the left – Sir George Grey Special Collection.

They built a new house in Roslyn Terrace around 1913.

At the outbreak of WW1 Frederick enlisted with the NZ Medical Corps, specifically the NZ Field Ambulance and became Corporal F Gladding (Service Number 3/1317). Frederick died in Palmerston North Hospital on 22 December 1915 due to an internal complaint and was buried in a military funeral at O’Neil’s Point Cemetery, Devonport, next to his infant son Dannie.

Northern Union followers and sportsmen generally will regret to hear of the death of Corporal Frederick Ernest Gladding, a well-known ex-footballer and sprinter, and representative of the Hawke’s Bay Rugby League on the council of the New Zealand Rugby League. Corporal Gladding, who was a married man with two children, joined the forces some two months ago. and became attached to the Field Ambulance Division.

About a fortnight ago. while in training in Trentham, he had to be operated upon for an internal complaint, and was removed to Palmerston North hospital. Subsequently a second operation became necessary, and this he did not survive. He died in the institution on Saturday, and his body was removed to his home in Roslyn Terrace, Devonport.

The funeral took place with military honours yesterday at O’Neil’s Point Cemetery. The coffin, draped with a Union Jack, was conveyed on a gun carriage (from his home in Roslyn Terrace), and the cortege was escorted by members of the Field Ambulance Division, the New Zealand Field Artillery, and of Companies 3 and 4 of the New Zealand Rifle Brigade.

Also represented at the funeral were the New Zealand Rugby League (by Mr D. W. McLean, ex president), and the Auckland League (by Mr R. Tatton). Both Leagues sent wreaths.

Elsie lived at 27 Roslyn Terrace in Devonport most of her life. From the 1928 Electoral Roll Clara Emma Daniel (mother) is recorded as still living at the same house, perhaps it is not until the last year (1929) that Clara is moved into the Costley Home.

At the young age of 30 Elsie had become a widow and never re-married. 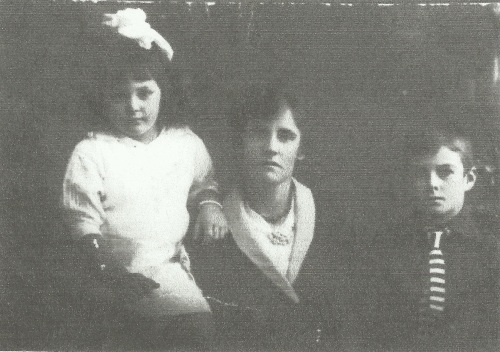 Elsie with Desmond and Gwendolyn.