Why or how the Captain chose to enter the lighthouse service I do not know, but perhaps the attraction of a Government position in the Public Service offered more security than seafaring for a private organization, I don’t know, but in due course I remember our family boarding the Government Light ship, the Hinemoa, Captain Bollons at Onehunga, bound first to Pouto at the Kaipara Heads.

From the Annual Report 1915-1916 New Zealand Maritime Department pages H.15, 4-8 we find a brief announcement that Mr Rowe, a harbour signalman, had retired with superannuation during the year ended 31 March 1916, and that Captain Daniel had been appointed in his place.

So we are now back on familiar grounds to both the Captain and his wife. At the conclusion of the Hinemoa’s visit to drop off stores, etc., Hokianga became the next port where the Daniel ménage were put ashore and the Captain became the signalman at the Heads, whose duties were involved with the movement in and out of Hokianga Harbour over a very rough and treacherous bar.

The signal station was on the South Head to the entrance to Hokianga Harbour from where signals to ships which sought entrance could be informed as to conditions and permission according to the state of the bar. This was achieved by the use of large wooden circular flat objects hoisted to their respective place on the yard that crossed the mast at the appropriate height. 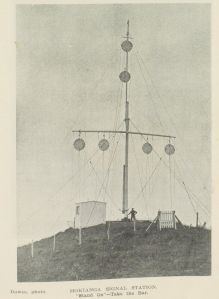 I don’t think the duties of the signalman were too onerous as I recall there was no lighthouse operating, hence the signalman operated only in daylight hours and by this time, with a war in Europe, there was not a lot of shipping activity and any that did take place were all local coastal ships.

Maintenance of this system was the duty of the signalman, and one of the duties in which the Captain was involved was renewing the posts let into the ground to which the stays that held the mast were attached, because they were rotten.

Hokianga was a rather dangerous bar harbour and had a Harbour Master whose name I think was Martin, and the old man became Signalman in sole charge at the Heads. This was a pleasant place for kids, tons of room, a pony, a cow, and of course many interesting people from ships awaiting a change in weather and the bar. Capt. George Sorensen was one who having been shipmates with my father became readily enough Uncle George, he made me my first model boat, a rough thing that I pushed around in the sand, blazing trails across unchartered seas to which only a child’s mind had access.

Parts of the signal station on Arai te uru Reserve still remain and can be seen on the site. It was first established by John Martin, an early settler who settled in the area from as early as 1827. He was also the pilot for the harbour, the duties of manning the station and pilot were passed down to his son, who held the position for a further 29 years, it is likely that it was Martin’s son who Barney recalls.

The residence for the signalman was about a mile from the station, was roomy, had a garden, a workshop, boat shed near the beach, cow bail and paddock for a cow. The milking was done by the Captain, I believe my mother refused but she made the butter. Our stores used to come from Auckland, generally in the Hinemoa and usually were despatched from the Farmers Trading Company, known previously as Laidlaw Leeds. A perusal of their catalogues was a source of endless delight to us children.

We children were well acquainted with the rural scene having ducks, fowls, cats, a dog, a goat, cows, also there were plenty of growing things the old man having made a garden hacked out of the bush of which I well remember luscious grapes, much of which when ripe my mother converted to jam. I have never tasted it or heard of it since those days.

I can’t recall how long we spent on Hokianga Heads, the Great War was still in progress but to us sheltered in such a remote spot, there were no indications to upset our childhood ways of investigating everything that took our fancy from tadpoles to watching to see a hen lay her egg, or my brother contemplating the teeth and eye sockets of a Maori skull that my father dug up in the process of excavating a hole for the new post for the signal mast.

I am not too sure just how Tapu works but it would seem that poor old Hongi happened to be buried just at the spot where the signal mast footing had to go. To my knowledge no ill befell the family, admittedly the news was not broadcast and so to all intents and purposes, even had Tapu been ordained at the time of Hongi’s committal to the earth in the arms of his forebearers, nothing of import occurred to the Daniel family.